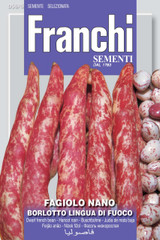 Bean Borlotto Lingua di Fuoco — Tongue of Fire. Bush type shell bean for soups or fresh cooked beans. Plant after soil has warmed up (a week or so before setting out tomatoes). Plant 1 seed 1 inch deep every 2 inches, in rows 12 inches apart. Thin to one plant every 6 inches.  Harvest when beans are plump and pods have nice red and white color. 65-70 days. 50 gram packet, approximately 75 seeds.

To see our growing guide for beans, click here.

I plant seeds so I have a Christmas in summer. I just put in seeds, then forget what I plant and wait for the presents to grow. I bought a bunch of seeds from Seeds of Italy and one of them happened to be Borlotti beans which I love to eat. I had no idea how to grow them and being the lazy gardener I am, I just threw them in an area that gets part sun, part shade and no gardening TLC by me meaning no watering. A few weeks later I had forgotten I had even planted something there and, once something started to grow, even forgot what I had put in. At first I thought it was green beens so stuck int a discarded wire fence because these plants seemed to want to climb given they were trying to go up an Arbovitae tree adjacent to them. Since I thought they were green beans, I tried to bite into a raw one because I love raw green beans. Gag, I quickly realized they were not so I just let them continue to grow. Low and behold, they started to take on this beautiful variegated coloring so I went back to all my discarded bags of seeds I planted and realize they were Borlotti beans. I started harvesting them and shelling them and freezing the beans until I had a huge bag of them. Finally, when they were all harvested, I cooked this lovely batch of beans and ate the entirety of them just in their cooking water with some olive oil drizzled over them and a little salt and pepper. They were the best beans I ever had.

Germination a little uneven but the plants that grew produced beautiful, large beans.

I tried the beans for one season. They are a bush variety. My garden has a tendency to produce rust. For pole varieties this is less of an issue but with this bush variety it got hit hard. The beans it produced were very tasty but it just wasn't enough to do with after the rust hit.

$4.00
Certified Organic Seed. Excellent tasting shell bean. 70 or so days. Productive, fairly early. Excellent in soups, stews or just cooked with some sage & served at room temperature with a drizzle...
Add to Basket
Add to Basket