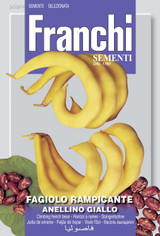 To see our growing guide for beans, click here.

I like yellow beans, and will contribute about 30% of my growing space to them. I started these curved Aniellos a week before my Neckargold yellow pole beans. Yet I've already had my second picking of the very prolific Neckargold, while these yellow curved Aniellos are just beginning to produce. I also have some yellow bush beans. So Aniellos are quite later; however, the vines are dense, very healthy, and finally are covered inside the tower with baby beans and a few are just beginning to turn yellow three weeks after my first Neckargolds were almost ready to pick. It is already late August. If you want yellows early, try Neckargold and do two or more plantings. If you want a whole lot of yellows and for a much longer season, do Neckargold plus the Aniello, and plant them at about the same time, perhaps two pole towers each. You'll get a longer season of yellows and lots of them. You could, however, replant your Neckargolds, and double up on that variety, and maybe get two pickings for each planting. Still, I like the variety. Yet with Aniellos, don't plant them too late in the season since they do take awhile. I will plant two towers of Aniellos again next year, plus two of Neckargolds. I have 16 bean towers and ration my space carefully among about six varieties.