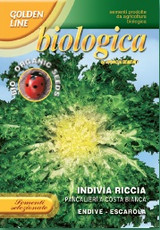 Endive Riccia Pancalieri - Organic. Very large full head. Nice frilly leaves. Larger and later than Cuor d'Oro. Bright green with large ribs and golden heart. Fall or spring, but best color and taste in fall. If desired, blanch heart by covering with pail or bucket or by tying up with string ten days before harvest. Cook as a side dish, use in soups or salads. The only organic Endive we can get. 7 gram packet. Approximately 900 seeds per gram.

To see our growing guide for endive and escarole, click here.

My Grandmother immigrated via Perris Island; she told me that her family survived on Endive during the winters in pre-world war I Pennsylvania: the plants kept alive during the winter, even if snow fell on it. It will make you tough, it is TOUGH; so, chop it (as stated above). RICCIA PANCALIERI C. BIANCA Endive (RPCB) is not nearly as bitter as Heart Of Gold (HOG). TRICK: Roll leaves together, then chop at 90 degree angles, dehydrate below 115 degrees and it counts as RAW, adding live enzymes held in dehydrated suspension. BETTER to saute RIGHT after chopping, fresh-made garlic oil, then add to soups, braise with meats BEST: THROw A WHOLE EGG ON THE SAUTE, PUT A LID ON, TURN OFF HEAT AND COME BACK IN 5 MINUTES. ROLL into a roll-up, seam-side down - it seems like a Nori Sushi Roll, but it is reduced Endive. Honestly, your guests will ask what this mysterious green is.

I grow organic and I love Franchi's attention to how the produce cooks so I plant Ricca Pancalieri. But, did you know that if you cut the main head so that you leave a tad of the growing crown still intact, you will get side shoots that are very frisee-like? The key is timing, You need to do it while there is still some optimal growing weather left (not too hot at the end of a Spring crop and not too cold at the end of a Fall crop). Did you also know that endive, and especially Ricca Pancaleiri, winters over well with protection. I just sold some at market last week (3/22/14) that i wintered over in low tunnels here in Ohio after an awfully cold winter. Paul Kobulnicky Ohio

$4.00
'Black of Milan'. This variety's dark green skin almost looks black. Originally from the Lombardia area of Italy, this productive plant has an open plant habit making it easy to harvest. Bush...
Add to Basket
Add to Basket