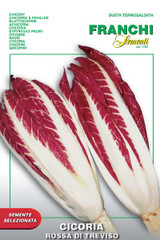 Radicchio Rossa di Treviso. The classic Italian Radicchio. Upright with red and white striped leaves with large pure white stems. 90-100 days depending on weather. Best for fall planting if you want mature heads. Plant anytime for baby leaves for salad. Use in salads or cook as a vegetable. 10 gram packet.

To see our growing guide for chicory and radicchio, click here.

Harvested it well into winter..and it came back the next year!

The seeds germinated very easily in mid May in our zone 6 garden in NY. We ate the small plants in salads as we thinned the row. Heads filled out nicely and were larger than I thought they would be, about 10-12 inches tall. Plants turned nice red color (with the ribs still slightly green) in late September. We harvested by cutting whole heads just above the soil line. I was surprised to find that the plants sent up new heads from the root, and a few plants even came back from the root the following spring. Definitely growing this one again.

Take some patience and Planning but worth the effort

I have grown this variety the past 4 seasons here in Massachusetts. The first couple of seasons I didn't start the transplants early enough so by late October/ November the plants were still small. I took them inside and forced using the water in plastic bucket method. They still made nice heads just small. I have gotten better about starting the plants late June and getting them in the garden in August. Usually I wait until late October to pick the root and bring them to the basement for forcing. I have tried wet sand and just water in the bucket both work. Unfortunately the deer also like the Radicchio so some plants have been feeding them.

Hard to get to head

Let me preface this by saying I have never been able to get great heads of Treviso radicchio. I'm going to try again this Spring. I have about 30 seedlings getting ready to plant out in a week or so. But last year it would not head. Lots of leaves. Used like romaine the greens were delicious in Ceasar salads. I must say, though, that the packet had enough seeds to grow radicchio commercially. And the seeds we wintered over all germinated. Great quality.

I grew this one several years ago for i had never tried growing Radicchio before. (And I got to grow everything at least once. I planted it in the spring though and got it out real early. I planted it where it would get afternoon shade once the trees leafed out. With a little watering and tender loving care, I did manage to get some small heads. I had in mind bigger heads, but it just could have been the growing conditions. It was a little bitter being it was picked in the onset of summer, but was still tasty in a salad. I think it would be great picked in the fall after a light frost. Mark Jenkins

great for two crops per year

I have grown this and used it both as a fresh leafy head and in the winter as a forced head as shown. My chef client loved the leafy head the best.

This radicchio did wonderfully in my garden- easy to sprout from seed, lasted a long time, really delicious, crunchy

it can't be planted in july- august for fall harvest

The small plants can't make it through the summer heat. Thanks Guido, There are a lot of radicchio growers in the NE and some commercial ones in the Connecticut River valley though. Dan

$4.50 - $36.00
This is another special selection in the award winning Mercurio line. For the specialty grower, a very stunning plant. Best for fall. 95-100 or so days from direct seed. Needs cold weather to color...

$4.50 - $39.00
Radicchio, Treviso Tardiva (Treviso 4). An Italian favourite from Northern Italy and the first Italian vegetable to be issued with DOP status like Champagne. Needs the frost to turn red and easily...