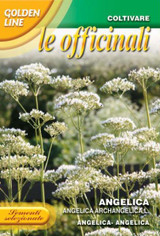 Angelica archangelica, commonly known as Garden Angelica, Holy Ghost, Wild Celery, and Norwegian Angelica, is a biennial plant from the Apiaceae family, a subspecies of which is cultivated for its sweetly scented edible stems and roots. Like several other species in Apiaceae, its appearance is similar to several poisonous species (Conium, Heracleum, and others), and should not be consumed unless it has been identified with absolute certainty.  It has fluted stems with jagged leaves made of small leaflets, each forming a ball.  Subsequent white flowers have an umbellifera form.  Deep rooted.  Can reach over 1 meter in height.  Used as a cut flower in the summer.  Can also flavor a wide variety of disthes like eggs or fish.  Can be candied and is also used in vermouth.  The dried root is used for infusions and herbal teas.  3 gram packet, approx. 400 seeds.

How to grow Angelica from seed

Angelica requires cold and light to germinate. The best way to achieve this is to press seeds into moistened potting mix in a jiffy pot or other container, then put the pots in a plastic bag and place in the refrigerator for two to three weeks. After the chilling period, place them in bright light at 60-65 degrees F. Keep soil mosit, but do not cover the seeds. Germination may take three to four weeks. The germination rate is low, so plant severeal seeds per pot and thin the extras later when they are growing well.

Be the first to review this product.

$4.50 - $39.00
Radicchio, Treviso Tardiva (Treviso 4). An Italian favourite from Northern Italy and the first Italian vegetable to be issued with DOP status like Champagne. Needs the frost to turn red and easily...

$3.50 - $6.00
Bean Rocquencourt. Yellow bush French bean named for the farming village of Rocquencourt near Versailles in France. It has been grown commercially since at least the 1930s and it remains popular...