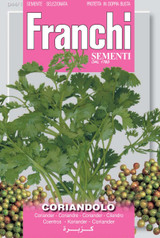 Coriander. Also known as Chinese Parsley or Cilantro, you can use both the seeds and the leaves for flavoring. This variety is slow to bolt, very cold resistant, and easy to grow. To direct seed, scatter seeds in a well prepared bed (1-2 inches apart if possible) and cover with 1/2 inch soil. Also can grow in pots. They transplant well. Make succession plantings every three-four weeks for a continuous harvest. 5 gram packet. Approx. 400 seeds. Approximately 70-90 seeds per gram.

The best cilantro & coriander seed ever

I still buy several seed packets every year. The plants are very vigorous and tall. I replant more at two to three week intervals for a continuous crop in each of its stages. Since cilantro/coriander is fairly cold hardy my garden is productive from mid spring up until Thanksgiving. In milder winters where I live near Cape Cod some of the plants actually tide over into the next growing season -- they grow a tap root in late fall. The plants produce a lot of cilantro which my family loves. Eventually the tall plants mature and produce white flowers which look sort of like Queen Anne's lace. Nicely ornamental in a rural sort of way. They attract honey bees profusely. Then the flowers mature into fresh, green coriander seeds. I harvest these powerful, intensely flavored green seeds before they ripen to grind into recipes for salad dressing, stew, whatever. I don't think you can buy the fresh green seeds anywhere, since their shelf life as green is rather short. So if you want them you have to grow your own. The Franchi coriander isn't the only one I have tried, but it seems to produce the largest plants with the largest seeds. If I were to grow just one variety, this would be it. NOTE: I grow my coriander next to my patch of Franchi wild fennel. They seem to get along especially well.

This is my favorite coriander/cilantro all around. In my raised garden beds it grows about four feet high and gets covered with lovely rural looking white lace flowers. The show continues for weeks. The bees love it, too. You can retard the bolting by cutting the flower stalks when they finally appear (they look different, with very fine foliage). I do that a couple of times then let it go. The flowers eventually go to seed. The unripened seeds are bright green, fairly soft, and have a very strong citrusy coriander flavor before they ripen. Crush some unripened seeds and add to your pesto, pasta sauce, vinaigrette, etc., but remember the taste is stronger than the cilantro leaves. After two or three weeks the seeds ripen to light brown and harden, and the taste becomes milder. These plants reseed themselves through the summer if you keep them weeded and thinned so the sunlight gets in. Some plants survive some winters in my garden, but eventually they do get knocked down to the soil level by the cold. Quite a few will come up from the tap root in the spring. I buy new seed nonetheless just to be sure.

$3.50
Sorrel. Annual herb. Easy to grow. Use to flavor salads; typical Italian 'aromatic'. Start 8 weeks before setout. Barely cover 2-3 seeds in a cell. Up in 7-10 days at 70 degrees. Transplant in...
Add to Basket
Add to Basket

Dishing Up the Dirt: Simple Recipes for Cooking Through the Seasons

$29.99
Andrea Bemis, the creator of the popular farm-to-table blog Dishing Up the Dirt builds on her success with this beautiful, simple, seasonally driven cookbook, featuring more than 100...
Add to Basket
Add to Basket