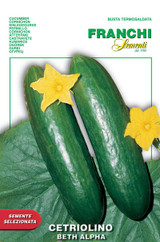 Cucumber Beit Alpha. These mideast type cucumbers have a very thin skin, absolutely no bitterness, are mild, productive over a long season, one of the earliest to produce, and should go until a frost. In short, they are one of the best all-around cucumbers available. Pick them when they are about five or six inches long for best flavor and texture. They do well on a trellis but you can grow them on the ground also. Set out transplants or direct seed three feet apart (3-5 seeds per hill, thin to three best plants) with rows five to six feet apart. 4 gram packet, approximately 100 seeds. Approximately 30-45 seeds per gram.

To see our growing guide for cucumbers, click here.

I grow these for their smaller size and delicious taste. Produces well and many of my customers like them for their gardens because they are easy to grow in a small space. Also, they produce just the right amount for 1 or 2 people.

Super Productive even in middle of summer in Florida

I've been growing these cucumbers for over a year and everyone I give them to says they are the best cucumber they every ate. I grow in containers/earthboxes and always get a huge yield regardless of variety. This summer I decided to see if cucumbers would produce in the heat and would bees come to pollinate. Both happened and I'm keeping track of the # of picked cucumbers. I planted 3 seeds - 1 in a Root Pouch, 2 in an Earthbox in May. I picked my first cucumber on June 26 and 4 weeks later am up to 170 picked. The plants are still going strong. I have not sprayed at all but do cover the plants at night with tulle so the pickle worm moths don't invade. I have only lost one cucumber to a caterpillar. I've run out of people to give them to. My husband made pickles (haven't tried yet).

UPDATE TO MY LAST

I just ate my first of 2 grown in the garden here in North Central Florida. This may be the earliest I've ever gotten cucumbers here. And they are as good as I had hoped they would be - crisp, juicy, sweet and not at all bitter. Thanks for providing this one Dan, it is an excellent selection.

Last year I wasn't able to plant the seedlings I started. I left them in the 3" pots they were started in, hoping to plant later, but never did. They were in an empty self-watering pot, and their roots grew down into the water collected in it's bottom. During the summer, the tiny (less than a foot long) plants produced 3 cucumbers about 5" long each, with a good flavor. That's a winner. I can't wait to see what it will do in the garden.

Not bitter at all ever

I grew them on a wire fence and they produced well despite the many bugs and high humidity in Ga. My kids loved them. They are best picked small as the seeds tend to get big unless you are pureeing the cucumber for a soup or don't mind removing the seeds.

I've grown these for many years and absolutely love them. I grow my cukes on a trellis because they get longer, are easier to pick and save on space. My only complaint is no matter what cuke I've grown over the years, I can't get rid of that darned cucumber beetle. As soon as the plants pop out, I sprinkle with 7 dust and attempt to continue throughout season and do a good job until we go on vacation. ANY SUGGESTIONS controlling the cuke beetle would be great.

I had never grown a "beit alpha" before but did so this year. They are fantastic. I have been a long time favorite of the long hothouse types that I grow outdoors on a trellis but last year I went to Turkey where it seems that the cucumber is the national vegetable and they are almost exclusively "beit alpha" types. I grew them this year in Ohio and they are doing really well. Very strong and healthy vines with mostly female flowers. This is true while my long cukes have struggled in the heat and dry conditions (even though I water consistently). If you have never eaten a "beit alpha" type and want to try them, look for them in the supermarket where they are sold 5 or 6 in a plastic clamshell container. Each cuke is about as big as a bratwurst. There is no better eating cuke.

$18.00
Tessitura Toscana Telerie is a wonderful linen company that makes all their products in Tuscany, Italy. These towels are beautiful enough to be wall art or sewn into kitchen curtains, but tough...

$3.50 - $28.00
Cucumber Piccolo di Parigi. Green pickler 3-4 inches long. One of the first cucumbers to produce fruit and produces over a long season. Very nice taste. Use fresh or for pickles. If using...