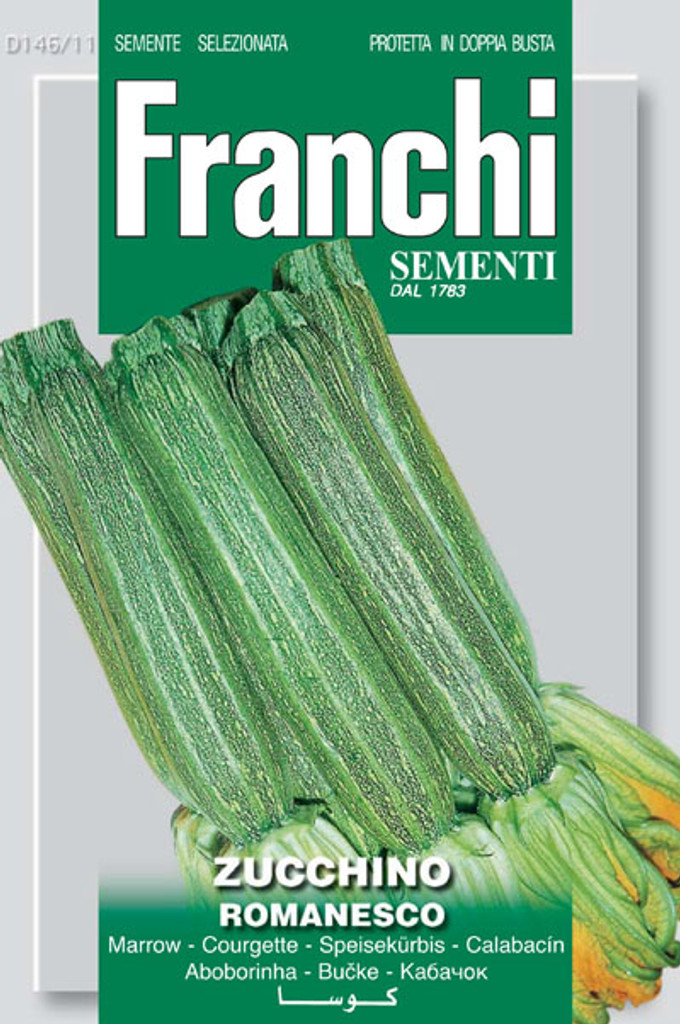 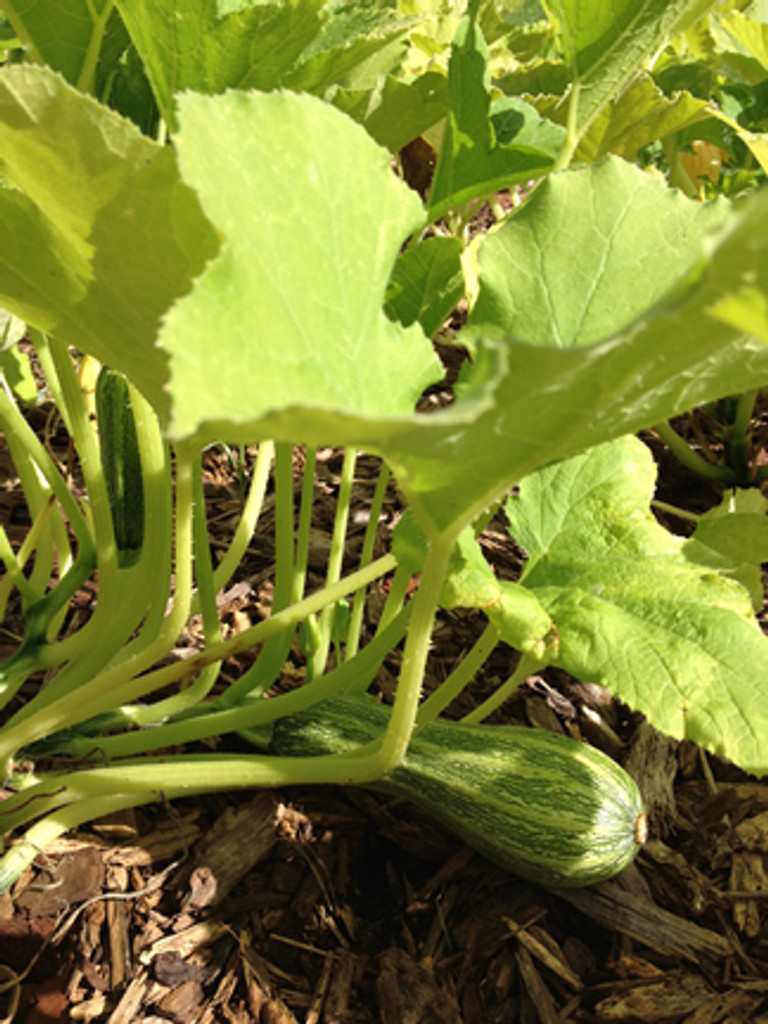 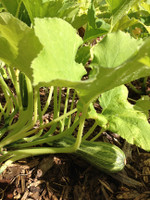 This is a big plant, as are most Italian zucchini. This is a good producer of grey/green fruit with very prominent ribs. Produces lots of flowers over a long season. Can be transplanted for an early crop, but you need to be careful not to disturb the roots. Set 4-5 seeds 1/2 inch deep in a six or eight inch pot 3 weeks before set out date (last frost date). Thin to 2-3. Set out at three foot spacing in rows six feet across. For direct seeding, 4-5 seeds every three feet, thin to 2-3. Keep well watered until germination (5-10 days). 55 days to produce fruit. Pack holds approximately 50-60 seeds. Approximately 2-10 seeds per gram.

This is a big plant, as are most Italian zucchini. This is a good producer of grey/green fruit with very prominent ribs. Produces lots of flowers over a long season. Can be transplanted for an early crop, but you need to be careful not to disturb the roots. Set 4-5 seeds 1/2 inch deep in a six or eight inch pot 3 weeks before set out date (last frost date). Thin to 2-3. Set out at three foot spacing in rows six feet across. For direct seeding, 4-5 seeds every three feet, thin to 2-3. Keep well watered until germination (5-10 days). 55 days to produce fruit. Pack holds approximately 50-60 seeds. Approximately 2-10 seeds per gram.

Write a review
These zucchinis were a JOY! The zucchini itself was the most flavorful and beautiful I have ever seen. (The inside sliced had this lovely mosaic look when picked market size.) They produced many zucchinis and early. I had zucchini before anyone else in my area! The one negative to these plants are their size. The full grown plant was 5 feet tall and it spread, taking up my entire garden! The thorns were very sharp ad I had to emerge my whole body to remove the fruit by the end. I had to pull them out early (and they were extremely hard to uproot). HOWEVER, I am still trying to figure how to get these in my yard, because the flavor was SO INCREDIBLE! I think they may be best planted next to a fence or in a garden where you can just let them spread.
Posted by Teresa G on 31st Dec 2017
Yes, the plants are large. But oh my, this zuke is sturdy and delicious when it hits the fry pan. Nutty, buttery and can't find any seeds... Maybe I will let 1 or 2 go to baseball bats and see if the seeds are useable. Naw, I'll just keep going steady with Franchi seeds. Life is complicated enough, leave the hard stuff to the Franchi experts.
Posted by Suzie M on 28th Jul 2017
I planted them a little late, but that's ok with this squash. They produced the first sizable zucchinis about a month after I planted them. The plants grow fast. The fruit is firm and sweet and doesn't break down when cooked. The slices have an attractive star shape due to the ridges. They are perfect at a foot long. The only problem I have is that the plants have a tendency to fall over, but they recover fast.
Posted by Robert in Arkansas on 19th Jul 2014
After reading other reviews about the flavor of Z.Romanesco, I had to give it a try. Every year I experiment with something new. So glad I did with this one! Flavor...so tasty. I find it a challenge to describe because I've never had a zucchini like this. Here is my best effort; creamy sweet buttery flavor with a hint of cucumber, the texture is more dense than other zucchinis and crisp. We have only eaten them raw so far, but I expect they will hold up well to cooking. I was a little worried at first because the baby zucchinis would wither before getting large enough to harvest. I called Seeds From Italy to ask if something was wrong. Dan explained to me the plants are not big enough to support fruit yet and to snap off the little ones. In less than a week I had my first harvest. Thanks Dan!
Posted by Trina - Houston, TX on 10th Jun 2014
Even when over grown, this variety produces squash with minimal seeds. I love the expression of the faces of those lucky enough to get my extras. They think I'm pawning off my rejects.
Posted by Hans Imfeld on 21st May 2014
This variety has become a staple for my Virginia garden since I first tried it several years ago. It has a unique complex savory, sweet, and nutty flavor which is rarely rivaled in my experience. The only drawback is that the plants succumb fairly easily to mid-Atlantic foliage problems but I I have found that a second mid-to-late-Summer planting does better than the initial mid-Spring planting.
Posted by Michael on 6th Apr 2013
This is one of those heirloom vegetables that is so much better than the commercial hybrids. We often slice the big ones and inch or two thick and grill them with olive oil, salt/pepper just like a steak. This is a big plant - very big actually, and prone to squash bugs, but worth the effort and space if you have it.
Posted by Jerry on 30th Mar 2012
these are ENORMOUS! they grow incredibly fast, think twice as fast most zukes, some have been 6-8 inches even before they bloom, which makes them nice to stirfry with the blossoms attached :-) if that wasn't enough, they have an incredible flavor, raw or cooked, and are not as watery at their more common relatives. they are sturdy enough to roast with potatoes, yet tender enough at 2 feet long that you can still pierce them with your fingernail.
Posted by Marion in OH on 22nd Mar 2012
These bear well over a long period and are easy to harvest when still small. Firm delicious flesh. A large plant. In my location superior to other striped Italian varieties. Also excellent for zucchini pickles.
Posted by Paul on 7th Dec 2011
This is the only zucchini I grow. Not only is it gorgeous, but the fruits seem meatier than other zucchinis--less watery with more of that pectin-like juice that you find in winter squashes. Great on its own or as a base for a full meal.
Posted by Steve on 1st Oct 2011
Load more 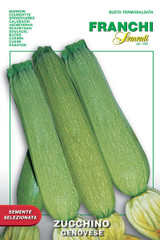 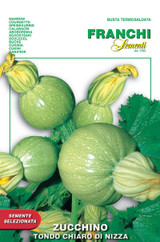 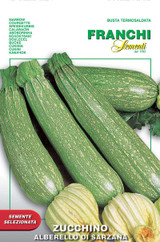 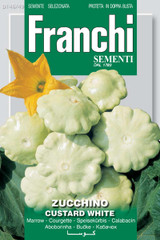