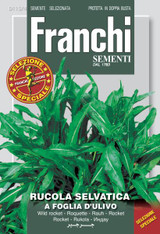 Arugula Olive Leaf is a wild arugula type with thin, flat leaves with no lobes. Growth is similar to Arugula Selvatica. It is delicate yet spicy and aromatic. 3 gram packet has about 1500 seeds.

Arugula has been grown since Roman times, reputedly as an aphrodisiac, and is used widely in Italian cuisine. It's great as a salad ingredient, or simply eaten alone with a sprinkle of salt and a drizzle of olive oil. In Italy, it is often wilted over hot pizza or in pasta just before serving. Ischia, an island in the Bay of Naples, has a traditional digestif liqueur made from arugula, called rucolino. Arugula pesto is made just like basil pesto, and is a good substitute when the weather is too cold for basil. Arugula survives low temperatures and is usually the first and last salad green in the garden. Under row cover, it will survive all but the coldest winters.

Sprinkle seeds about an inch apart. Replant frequently for a long season of harvest. Our huge packets provide plenty of seed!

To see our growing guide for arugula, click here.

This Arugula seems to handle the California summer heat very well. It germinates easily after a casual hand-scatter. Of course it makes a beautiful and fluffy garnish for platters, but I recommned it stuffed into sandwiches, and ground into pesto. Has the same peppery kick, but sweeter, and with a garlic taste at the end. Its flavors go through several stages in the mouth, a most interesting unfolding. We have had lots of compliments on it, most notably from our meetings of Contra Costa Winegrowers, to which we belong. I have shared the seed with a chef friend of mine, who loved the sample I brought him. Try it; you'll love it!

$4.50
Arugula Coltivata sel. Ortolani is a Franchi Special Selection of cultivated arugula. It is more consistent in taste, color, and growth habit. The packet is larger than the regular Arugula Coltivata...

$3.50
Arugula has been grown since Roman times, reputedly as an aphrodisiac, and is used widely in Italian cuisine. It's great as a salad ingredient, or simply eaten alone with a sprinkle of salt and a...