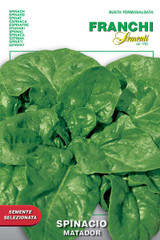 The first picking was nice and tender and sweet. The second picking was more coase and the leaves were tough with a more bitter flavor. It is excellent mixed in salads or just plain with red onion, dried cranberries, and walnuts with raspberry vinaigrette dressing.

These are my top 2 spinach varieties. I've tried many kinds and these are the only two that take the heat we can sometimes get in early spring (97 in May! in 2014). Merlo Nero gives me spinach in 45 days, and Matador in 60. I plant one on each side of the bed. I cut the Merlo Nero one week, two weeks later, I cut the Matador. Two weeks later, the Merlo Nero has made one more batch and if the heat doesn't get too bad, I get one more picking of Matador. I love to be able to sow an entire bed at one time and pick for weeks. Both of these are tasty and productive.

a little smaller and sweeter than winter giant, but takes warmer weather a little better too, i plant both :-)